Home/Uncategorized/Lift the Ban Coalition
Previous Next 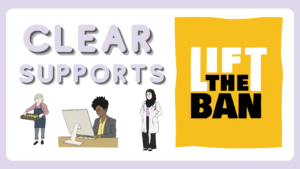 The Lift the Ban Coalition: What’s It All About?

In the UK, people seeking asylum are not allowed to work. Instead, they must live off an allowance of just £39.63 per week, which is expected to cover everything but government provided accommodation. The government claims that asylum applications are ‘usually’ responded to within six months, but according to their own figures on asylum and resettlement, in September 2020 roughly three quarters of the 48054 people waiting for an initial decision on their application had been waiting for longer than this. After a full year of waiting for their asylum claim to be processed, people can apply for the right to work. If successful, the individual will then be granted the right to apply for jobs from a limited list of positions for which there is shortage of people in the UK. This list currently includes jobs such as ‘Chemical scientists – only jobs in the nuclear industry’ in Scotland, or ‘Dancers and choreographers – only skilled classical ballet dancers or skilled contemporary dancers who meet the standard required by internationally recognised UK ballet or contemporary dance companies’ in any part of the UK. Furthermore, in a survey carried out by Lift the Ban of 36 people who had applied for permission to work after the 12 month waiting period, only 8 were granted permission, and of these only 2 actually found jobs, suggesting that the current system isn’t working.

The Lift the Ban coalition is a group of over 200 UK organisations, including CLEAR, calling for the right to work for asylum seekers after 6 months of waiting for their asylum claim to be processed as opposed to the current 12, and in any job, not just those from the limited shortage list. Six months was selected due to it being a more achievable goal than total removal of the work ban, a decision you can read more about here.

The weekly allowance asylum seekers are currently given is expected to cover their every expense apart from housing, meaning food, clothing, phone bills, transport and more. In Lift the Ban’s survey of 246 people with experience of the asylum process, 94% of respondents said that they would want to work if they were legally able to do so, indicating the extent to which this policy could positively affect people’s lives.  Meanwhile, the same report found that 52% of the asylum seekers questioned had used a food bank at some point in the last year, demonstrating just one way in which the government allowance falls short. The restrictions on working make it literally illegal for people seeking asylum to try and lift themselves out of an extremely difficult financial position. This seems like the exact opposite of the government’s oft-touted argument against giving away too many state benefits: that people should instead be encouraged to manage their own affairs and look out for themselves rather than ‘depending on handouts’ (my quote marks). Reducing the work ban to six months, as per Lift the Ban’s aims, would allow those seeking asylum much greater independence and control over their own lives, reducing the number of things to worry about during what is already a very difficult and stressful period.

Additionally, Lift the Ban argues that there are also strong economic grounds for granting asylum seekers the right to work. They suggest that a change in the law could save £42.4 million of public money every year, an estimate based on the savings that would be made by not having to provide the current allowance to people waiting for their asylum claim to be processed, and through the additional money the government would be able to take in in tax and national insurance from the newly employed asylum seekers.

To find out more information about Lift the Ban, visit their website here, download an activism pack here, and read their report here.